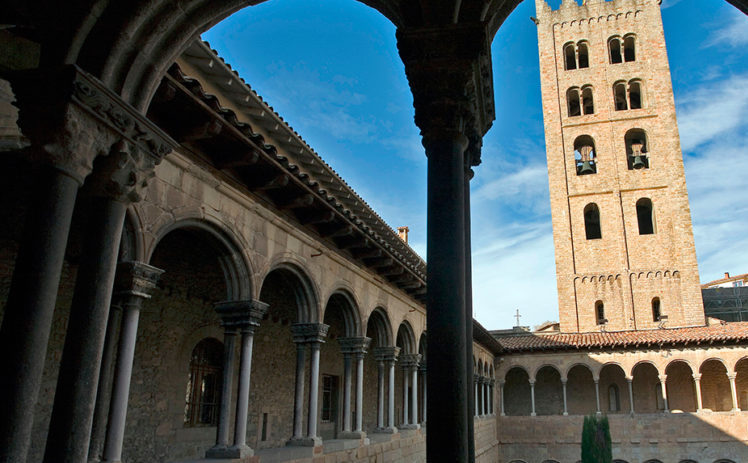 The Monastery of Ripoll is one of Catalonia’s most outstanding Romanesque monuments, with great historic and artistic importance. One outstanding feature is the 12th century entrance, one of the best examples of Romanesque sculpture and a Unesco World Heritage Site candidate. Along with the basilica, the cloister and the interpretation centre will allow you to enjoy an authentic journey to the cradle of Catalonia.

The Monastery of Santa Maria de Ripoll was founded in the late 9th century by Count Guifré el Pelós and his wife Guinedilda with the aim of repopulating de Ripoll Valley. The monastery quickly prospered under the protection of the counts and in the 10th century became a cultural centre of reference in Medieval Europe. Its library was home to valuable documents of different origins and topics, both religious and of technical, legal and historic fields. The monks themselves would copy and prepare these documents for the monastery scriptorium, including richly illustrated bibles. All that could be saved from the looting and fire of 1835 were 231 volumes, which are kept at the Royal Archive of Aragón.

The great basilica, with five naves and seven apses, was established by Abbot Oliba in 1032 and is a great example of First Romanesque. It has undergone several modifications over the centuries, due for example to the 1428 earthquake or to destruction caused by armed conflicts in the 18th and 19th centuries. Its current form is thanks to the reconstruction carried out in the late 19th century.

The cloister has 10th century archaeological remains (accesses to the chapterhouse and refectory), but the galleries we see were built between the 12th and 16th centuries, so we find a variety of styles, from the Pre-Romanesque of the early monastic chambers to the Gothic of the subsequent galleries. It is important to highlight the northwest, Romanesque and coetaneous gallery of the entrance. Human and fantastical figures, animals and plant motifs are represented on the high quality capitals.

A true journey to the cradle of Catalonia.

Reception of the monastery

Visiting Santa Maria de Ripoll is close to one of the most beautiful and evocative buildings in Catalonia, where you will discover the soul of a land that became the cradle of Catalonia.